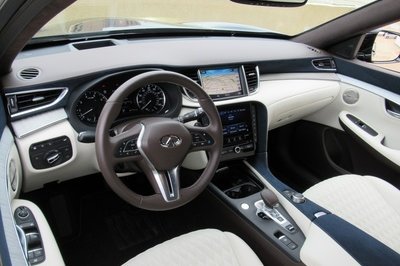 Infiniti was early to what has become one of the industry’s hottest market segments: the compact luxury crossover. The 2008 EX35 was much more of a car than an SUV, a slightly elevated, slightly roomier version of the acclaimed G35 sports sedan. Infiniti bet big that buyers would sacrifice utility for performance — and it bet wrong. Despite beating most competitors to the market, and even after numerous upgrades over the years (including a longer wheelbase and a name change to QX50), it never made a splash. Later arrivals were able to emulate the more successful compact luxury crossovers and avoid Infiniti’s mistakes.

So not surprisingly, for its first full redesign in more than a decade, the 2019 Infiniti QX50 similarly gravitates toward the class norm. It became taller and wider, adopting more SUV-like proportions. It switched from a V6 engine and a rear-wheel-drive platform to a turbocharged four-cylinder and front-wheel-drive (still with optional all-wheel-drive). All of that mirrors such top rivals as the Acura RDX, Lexus NX, and Cadillac XT4, though a few other competitors still have rear-wheel-drive roots.

But beyond being merely typical, the QX50 is decidedly ordinary as well. It checks general boxes for the luxury crossover class without managing to dazzle. It neither fun and sporty nor vault-like in its serenity. Its infotainment isn’t cutting-edge. It has advanced engineering behind its variable-compression engine, but the real-world effect is less notable.

To be sure, calling a luxury car “ordinary” compared to its peers is no great insult. That means it’s meeting the high standards of its class, even if it doesn’t exceed them. So if you’re looking for a comfortable, quiet, respectably spacious, and generally easy-to-drive small luxury crossover, the QX50 is one of many potentially attractive choices. Prices start at $37,645 including destination change.