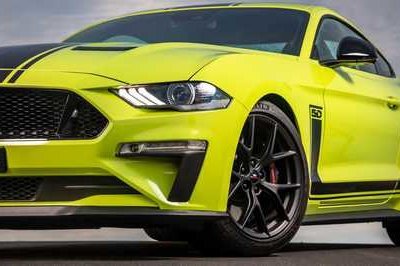 Once you see it, you can’t quite unsee it and for all the good reasons. This is the Ford Mustang R-Spec, a GT-based limited-edition variant built in RHD only for the Australian market that features a plethora of Ford Performance parts, a Roush supercharger, and an active exhaust. That makes it the first supercharged Mustang to be sold through Ford dealers.
With all the goodies that have been crammed in the R-Spec, power goes all the way up to 700 horsepower and 610 pound-feet of torque or about 170 horsepower and 180 torques over the Mustang Shelby GT350. At $67,500 in Oz, this could just be a great bang for the buck if you can get your hands on one of the 500 examples that will be made.

It’s been five years since Australian Blue Oval fans have been mourning the loss of Ford Performance Vehicles (FPV), Ford Australia’s division that used to turn around the really quick Fords at the antipodes. While nothing can replace a Falcon with all of FPV’s go-fast features added to it, the R-Spec Mustang is a nice addition to the sports car’s lineup in Australia where, until now, all you had to choose from when it came to ’special’ Mustangs was the Bullitt – and only 700 of those have been made for the 2019 MY (the R-Spec is part of the 2020 MY Mustang lineup).