With a certain global pandemic currently wreaking havoc around the world, there’s never been a better (and more appropriate) opportunity to spend some time alone. But being in self-isolation—or at least isolating with your loved ones—doesn’t mean you have to stay cooped up inside. In fact, it might the perfect time to spend some time in the great outdoors. And what better way to safely enjoy nature than in one of the well-appointed luxury campers and trailers that we’ve seen hit the market in recent years. Below, 10 trailers that will help you enjoy social-distancing in style and comfort. 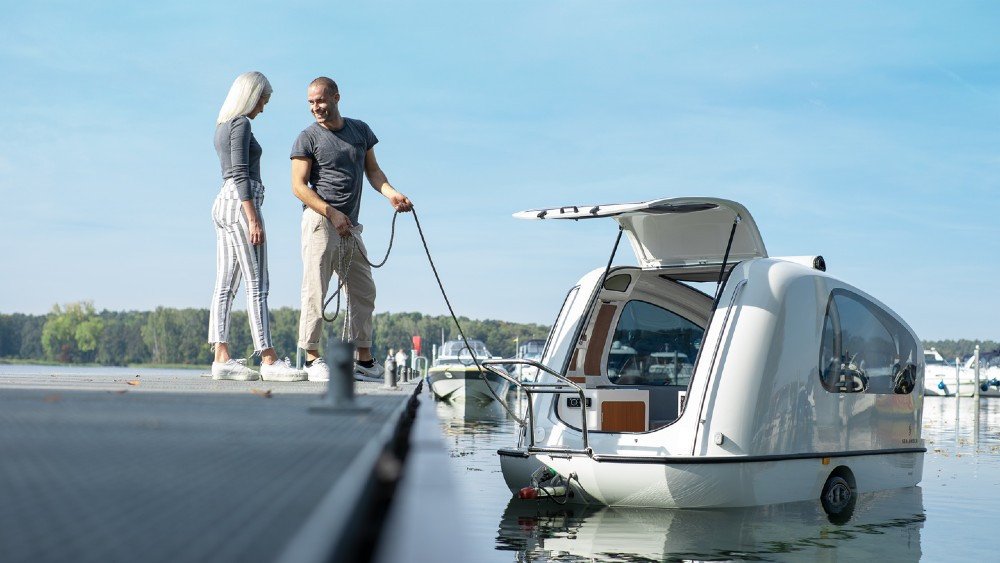 More of a tiny “flexible caravan” than a camper, the Sealander offers something the other trailers on this list all lack—seaworthiness. If you’re camping near a body of water, you can drive the two-person Sealander down to the lake or river, where, because of an outboard engine, it can actually be used as a boat. With a shell made of fiberglass reinforced plastic, the German-made camper, which starts at $21,000, is also light enough to be towed by a small-sized car making it perfect for an impromptu weekend getaway for two.

The Nest by Airstream

The Nest by Airstream is a modern update of America’s most iconic camper. The aluminum aesthetic of yesteryear, one that’s inspired thousands of free spirits, is gone, only to be replaced by a new, neutral-colored, sleek fiberglass design. The radical switch-up is an attempt by the company to win over millennials more interested in modern design and comfort than the charms of mid-century Americana. Starting at $45,900, the spacious trailer also features a number of “millennial necessities” like a comfortable Tuft & Needle Adaptive Foam Mattress, air conditioning and heating, a well-equipped kitchen for foodies, Bluetooth-controlled lights, and multiple USB and 110V charging outlets.

The interior of the Tabbert Cellini Slide-Out

The Tabbert Cellini Slide-Out may look like the camper of your youth on the outside, but that’s where the similarities stop. Open up the side door of the sizeable German camper and you’ll find it’s as luxurious as the most decked-out rock star tour bus, only a little more tasteful. Starting at $83,425, the trailer’s spacious and glossy interior features a full-sized kitchen, comfortable living area and a bedroom with more than enough room for a queen-sized mattress and a gorgeous wood and steel-decorated bathroom. Also, as the name hints, it features a slide out portion that makes the camper’s already deceptively large living area even larger.

Almost more of a portable house than a camper, the Land Ark Drake basically lets you take all the comforts of home on the road. The gigantic, yet stylish, two-level, 357-square-feet trailer can comfortably sleep seven adults. Stark and modern on the outside, the trailer features an equally clean white-washed pine and black metal decorated interior. Across its two floors it has room for a full-sized kitchen, living room and bathroom (which includes a bathtub), along with two loft bedrooms and an office which can also be converted to a sleeping area. It may cost $139,000, but you’re getting a lot of value for your money at that point.

Matthew Hoffman’s Living Vehicle campers aren’t just for a weekend in the woods, they’re for actually living there. The chrome, shoe box-shaped trailer offers everything you would want from a New York apartment, with basically the same square footage. Costing $150,000, the former architect’s campers have it all—outsized windows, a skylight, spa-style bathroom, washing machine and a roof-top solar system allowing for off-the-grid living. And because everyone’s idea of what makes the perfect home is their own, each unit is fully customizable.

The gleaming chrome trailer that’s believed to have inspired the Airstream Clipper is back. Bowlus has decided to update the Road Chief 85 years after Henry Bowlus, the aircraft engineer, designer, and builder it was named for (and who built the first one). Though it still takes its style cues from Bowlus’s first trailer, the new and improved 26-foot-long Endless Highways edition, which starts at $187,000, comes with a long list of modern conveniences, including heated floors, continuous hot water, air conditioning, cellular booster and modem, private Wi-Fi network capability and remote power management via smartphone app or the internet. Oh, and it can be powered for an entire week by a 4 kWh lithium iron phosphate battery.

A lot of the campers on this list have unique features that set them apart, but only the Romotow trailer has a secret built-in, synthetic teak-floored patio. Designed with mobile living in mind, the camper unfolds—just like its aesthetic inspiration, a swiveling USB drive—to reveal the patio, which even includes its very own fold-down grille. But the camper concept (expected to cost $350,000) has more to offer that just a nice space to unwind; it also has a central kitchen, bathroom, separated bedroom and a living area that can be converted into a second sleeping space, while the roof is lined with solar panels that help feed the unit’s 400 Ah battery.

Maybe you want to get away for a bit, but also want to take your home with you—or at least a close approximation of it. Well, then the SLRV Commander 8×8 is definitely the camper for you. The hulking, two-level utility has room for a master suite, a sizable kitchen, entertainment areas, and it can comfortably sleep up to 10 adults. Built on a specially engineered four-point torsion-free military truck chassis, the top-of-the-line Commander model also has plenty of power thanks to a beefy 12.5-liter diesel engine that’s capable of churning out a very impressive 280 hp at 1,900 rpm.

In term of campers with a modern aesthetic, Hymer and BASF’s VisionVenture may be one of the best looking of the bunch. But as stylish as the eco-conscious van may be—it features over 100 3-D-printed parts—it’s also got just about everything you’d need for some time away from home, including a kitchenette, dining and seating areas and a shower cubicle. So how does the VisionVenture have room for all this? Hymer moved the sleeping area to a temperature-controlled, roof-mounted pop-up tent accessible via an indoor staircase.

Wait, the Cybertruck is a pickup, right? Yes it is, but Elon Musk has also revealed that the company is developing on a matching trailer for its battery-electric truck, or, as he put it, a “sick attachment.” As with many of the CEO’s bolder announcements, details are still scarce, but the Cybertruck’s 14,000-lb. towing capacity suggests it will be sizable and well-stocked. But if the idea of dragging an angular trailer behind your pickup sounds cumbersome, the EV maker is also working on a self-contained camper configuration. Based on renders, this add-on will include a pop-up tent, extra seating and a kitchenette-area.